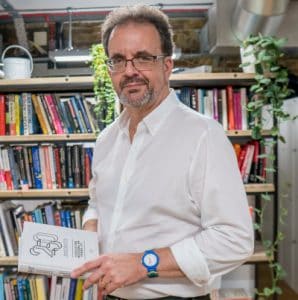 I love innovation stories of how a product came into being or was made more valuable. Our guest, Giles Lury, loves them too. So much, that he has written books with innovation stories, including his most recent one titled Inspiring Innovation: 75 Marketing Tales to Help You Find the Next Big Thing.

Giles has worked on numerous innovation projects, leading to some major successes and, not surprisingly, the occasional failure. He has some good stories to tell.

Summary of some concepts discussed for product managers:

[3:16] Xerox is a familiar brand to many listeners. Tell us about their innovation with copiers.

Xerox copying came out of the science of xenography, which allowed people to use a mixture of heat and ink to reproduce things. In the 1940s, there was a machine that could make 7 copies per minute, but it had a high flame risk. Xerox got around this by selling a fire extinguisher with its machines. It was a gamble, but it paid off. It was a good example of getting something to market, then making it better.

E-Leather is a young company based in the UK. Pinned to the wall in their office is a poem about the founder, who never gives up and who hates waste. He found that up to 50% of leather ends up in landfills. He developed a process for taking rough leather and recompressing it into products that are more appealing to customers. The products are more comfortable and more economical. They just signed a deal with Nike, who is looking to be more environmentally friendly. This is a good example of how something you hate can drive innovation.

I often tell companies to look to their own industry. For example, the first mobile phone call was made in 1973. At the time, the only way you could make mobile calls was in the car. A Motorola employee was watching James T. Kirk on Star Trek  flip open his Communicator and had the idea to create a personal phone. That idea would go on to become the first cell phone. The first call he made was to AT&T to tell them that Motorola was ahead of them. Science fiction is a great source of innovation and ideas.

Chewy’s founders had a previous online retail business that didn’t work. They took a step back and realized they were passionate about their dogs. That passion is where the company started. They said they wanted to be “Zappos on steroids” in terms of customer service, and they’ve been able to do that. There’s one story of a woman who called saying her pet died and asking for a refund on a product she’d ordered. She ended up talking for a long time with the customer service representative and received flowers from the company the next morning. This was not a one-off; Chewy does these things all the time and it’s made them distinctive in the marketplace.

[23:37] What’s the relationship between brand and product?

If you have a good brand, you probably have a good product. But having a good product does not always necessarily equal a good brand. To do that, you can look back to the history of Lever and Watson in the soap business. Watson made the product, but Lever identified a gap in the market. He made sure that the product was consistent and developed customer loyalty back in 1884. It’s about consistency and building trust with your customers. Tetley and Heinz did something similar by changing their products to meet customer needs. Tetley made a round tea bag that could fit into a mug, and Heinz turned the ketchup bottle upside down so it was easier to squeeze.

Would you bet your life on your new product? One innovator did that at the World’s Fair in New York. He was on a platform suspended by a rope, then he took an axe and cut the rope. The platform began to fall but then stopped, and the crowd gasped at once. The inventor was Elijah Otis and the product was the safety brake for elevators. Skyscrapers would never have been possible without this innovation. He needed a big stunt to convince people that the innovation worked, and that it was important to consider.