What product managers need to know about having an ecosystem strategy 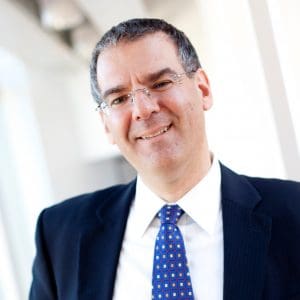 Today we are talking about strategy. It’s an important topic because our work as product managers and innovators should be in alignment with our organization’s strategy, but strategy may not be what you think it is.

To help us better understand strategy and the large changes taking place in many businesses, Dr. Ron Adner joins us. He is a Professor of Strategy and Entrepreneurship at the Tuck School of Business at Dartmouth College. Previously he was the Akzo-Nobel Fellow of Strategic Management at INSEAD. His research examines value creation and competition when industry boundaries are changing. His latest book is Winning the Right Game: How to Disrupt, Defend, and Deliver in a Changing World. He has received high praise from his contemporaries, including Clayton Christensen who described his work as “Path-breaking,” and Jim Collins (author of Good to Great) who called him “one of our most important strategic thinkers for the 21st century.”

Strategy is an indication of what you want to do. A classic test for strategy is,

Mainstream strategy includes Porter’s five forces, low cost differentiation, and Clay Christensen’s work on being more sensitive to substitute threats. These tools are based on the problems we had in the 1950’s-1990’s, but the world has changed. It’s getting harder to stretch those frameworks that were built for a world well-defined by industry into the world we face today. Examples of classic disruption like Southwest Airlines relied on new technology, but the industry was the same. Today, the industry is no longer the industry. For example, what is Fintech—insurance, investment, gambling, personal identity? The boundaries around industries are shifting, and that’s why we need a new approach to strategy.

[7:35] What are some examples of changes in the business environment that influence strategy development?

Take the automotive industry. We used to think of it as Ford vs. GM, and then Toyota started delivering higher quality cars at a lower price, but they were all selling cars. Tesla is different. They’re making electric vehicles, but they’re also making an electric charging infrastructure and servicing vehicles with over-the-air updates. They’re the dealer, fuel provider, and service station.

Now the buzzword isn’t industry; it’s ecosystem. The clean boundaries of knowing who is doing what have broken down. A hundred and twenty years ago, autos were an ecosystem. People were trying to figure out who would make cars, pave the roads, and provide fuel. As those relationships became stable and accepted, we conceptualized the auto world as industries. Now we’re moving back into an ecosystem mode—rewiring and reconfiguring. The challenge for strategy today is we’re transitioning from the stable configuration of industry into a new reconfiguration of ecosystem. All the old tools in our toolbox were built for a world of industries and break down in this world of ecosystems.

[10:55] How has the perspective of business model innovation impacted the ecosystem perspective?

The business model is a company-centric view of how to make money. The challenge with business models is you can overlook what it takes to get partners in place and willing to participate in your vision. If you don’t have a business model that makes sense for your partners too, you’ll be disappointed with the lack of alignment and inability to deliver.

[13:24] Have you seen dependencies on partners changing over time?

Today we see partners taking different roles. In the automotive supply chain, there’s a huge amount of interdependence, but the structure of the interdependence has been stable. We knew who’s making the car seat, and they ship it to the assembler then to the dealer. Today we’re seeing reconfiguration. The people making the car seat might want to gather data about the customer.

We’ve always had interdependence, but today technology makes it easier to pull things together in new ways. Even small organizations are participating in reconfiguration.

As a product manager making one block, you should be thinking about what happens outside that block. A company with an ecosystem strategy has a wide lens perspective on doing a great job on their piece and knowing how other pieces come together.

[16:10] What does the title of your book Winning the Right Game mean?

It’s a subtle play off the book Winning by Jack Welch, CEO of General Electric. If you wanted to be in GE, you had to win—by being the best in your industry. It was very clear what game you were playing—for example, making ovens. Winning the Right Game suggests there are multiple games being played today on the same game board. Amazon is making smart ovens that do something different from GE’s ovens. There are multiple games in what used to be a well-defined space. The title is also supposed to evoke fear—you might be winning the wrong game, which feels an awful lot like losing. That’s why we need a new approach to strategy.

Kodak is the perfect example. You’ve probably heard this story wrong, that they died because of inertia and clinging to their own ways. Actually, they did have a hard time accepting digital cameras until 2000, but then they went through an incredible corporate transformation and bet their company on being the next great digital printing company. They succeeded and became the number-one seller of digital cameras in the US and the number-four seller of inkjet printers in the world. However, digital printing became irrelevant because of digital viewing. Inertia didn’t kill Kodak; the iPhone did. People didn’t need to print pictures anymore.

Kodak won the digital printing game, but that was the wrong game. The Kodak story also raises the question, how did so many people get their story wrong? We’ve been told they died because of lazy management, but they were neither lazy nor unsuccessful in what they were trying to do. People misdiagnosed their problem because the tools we have are focused on what’s happening within an industry. They think if a giant falls it must be because they didn’t embrace new technology. Transitions aren’t just about technology. They’re about changing the boundaries across industries. A phone could never be a printer, but a phone with a screen can undermine the need for a printer. We need new tools, frameworks, and concepts to be able to see ecosystem disruption coming in the future.

[21:53] What tools can we use to think about strategy in this ecosystem environment?

From the Kodak story, there are two key tools that can help us see ecosystem disruption coming. First is value architecture, which is thinking about your value proposition in value-based terms. For example, first we capture the image, then we produce, view, and share the image. Value architecture is a framework for creating value-based categories to pressure-test the impact of technological change. Once you have these categories, you can look at phones getting better and see how they can impact how photos are viewed. Ecosystem disruption happens when change is running across categories rather than changing the technology within a category. Value architecture starts with calling out how you’re framing the problem you’re solving. From there, you can begin to see a new set of interactions.

The second tool is value inversion. In competition, we have two different kinds of relationships: As rivals and substitutes get better, you are worse off. As complementors get better, you are better off. Value inversion says complementary relationships aren’t necessarily permanent. Some complements will always benefit you as they get better. For example, if you’re Kodak and bet on being a digital printing company, improvements in the photo-processing chips inside cameras are always good for you. Other complements are maturing, such as photo sensors. As pixel density increases, pictures get better and people want to print more pictures, but once you get to 20 or 40 megapixels, the difference doesn’t matter. Value inversion is concerned with the third kind of complements, which can get too good. For example, having a screen on the back of a camera was initially good because it helped people take better pictures that they wanted to print, but as the screen becomes better, suddenly there’s no difference between looking at a picture on paper and looking at it on the screen. Now that complement has become a substitute. A competitive threat can come from someone who started off as a helpful partner. If you’re only looking within an industry boundary, you won’t see this dynamic, so to innovate you need to know how to track these dynamics to be more effective in offense and defense.

“Your people cannot make sense of your strategy if they can’t describe it.” – Ron Adner