How product managers can boost innovation in companies large and small 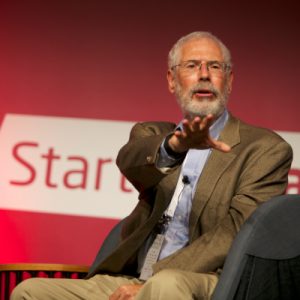 In 2012 I read a book titled, Startup Owner’s Manual: The Step-by-Step Guide for Building a Great Company. It’s a book that spoke to me. It tied together many of my experiences and I helped me put them into a framework. It shared the need to get out of the office and learn from actual customers – something I had found vital but that I did not always practice on projects.

Finding this book also made me aware of Steve Blank, its author. Later, like many of us, I learned about Lean Startup thinking from Eric Ries and found threads to adjacent thinking that was in the Startup Owner’s Manual. It made sense to me later when I read Steve Blank saying that Eric Ries is his best student. Consequently, I think of Eric Ries as the create of Lean Startup and Steve Blank as its father.

Steve is someone I have wanted to discuss innovation with for a long time and this interview fulfills that dream. I hope you enjoy it!

[6:13] What is the purpose of your book The Startup Owner’s Manual: The Step-by-Step Guide for Building a Great Company?

As I reflected on my life as an entrepreneur, I recognized a pattern in my experiences with eight startups that I had been a part of over 21 years. Investors told startups to act like smaller versions of large companies—coming up with a business plan on paper without talking to customers or testing prototypes. Successful startups ignored that advice. I wrote The Four Steps to the Epiphany, which kicked off the Lean Startup movement. I articulated Customer Development methodology, which says:

My student Eric Ries became the first adopter of Customer Development and recognized that in the 21st century, people were starting to adopt Agile Engineering, where you build products incrementally and iteratively. Alex Osterwalder then popularized the Business Model Canvas, which describes on a single piece of paper the key things a founder needs to know. Customer Development, Agile Engineering, and the Business Model Canvas became the Lean Startup. After the startup world rapidly adopted the Lean methodologies, I wrote The Startup Owner’s Manual: The Step-by-Step Guide for Building a Great Company as a handbook for how to use those methodologies.

[19:48] How have you seen the startup environment change since you published The Startup Owner’s Manual in 2012?

The Lean Startup and Customer Development came out of the rubble of the crash of the dot com bubble at the turn of the century. After the crash, investors became risk adverse and were looking for product market fit. It was a mass extinction of startups and investors. The Lean methodology emerged as a way to build startups iteratively and incrementally without wasting a lot of resources. With Lean, you can pivot quickly; incremental changes are much cheaper and faster than failures later. I think we’ll see a similar effect in 2020 as Lean is used and we develop new methodologies to take advantage of a changed environment.

[23:51] Why do larger, established organizations need to apply ideas from The Startup Owner’s Manual?

The last decade has been pretty tough on established organizations. They’ve seen a lot of disruption because everything is changing around them. Large companies started looking at startup tools to deal with high-speed changes and disruptions in their business models. In 2013, Harvard Business Review published my article “Why the Lean Startup Changes Everything.” Corporate CEOs realized that they could use the toolset that startups were using. In the 21st century, being an ambidextrous organization, able to execute and innovate simultaneously, is not optional.

[28:04] How are these large organizations doing?

A lot of corporations adopted innovation theater, not innovation. They copied the patterns of successful startups, but didn’t get the outcomes they desired. These companies were focused on demos, not delivery. They never really solved the hard problems like integrating the innovation pipeline into the organization and accepting failure as learning and discovery.

[30:20] How can established companies integrate innovation?

All companies have great passionate innovators, but in large corporations, they’re frustrated. Large organizations celebrate the stories of innovation heroics, entrepreneurs who fight the internal company system and get a product out against all odds. But this means the company doesn’t have a system for innovation. What they really need is an innovation doctrine, which is the heuristics and rules that allow innovation to thrive. This can’t be implemented by individual heroics; it must start at the board level. Large organizations need to have core processes that are risk-averse, but also have parallel procedures that allow innovation.

[34:06] What are the four pieces of the innovation doctrine?

These levels of formalizing innovation in large corporations will do what the Lean Startup did for early-stage companies. Large companies aren’t just bigger versions of startups, so they need their own processes. They need an innovation doctrine. Download the 1-page Action Guide to help you or your group get the most out of this information.

By getting the guide you consent to receiving regular emails from me, Chad McAllister, with insights for product managers along with exclusive offers. You can, of course, unsubscribe at any time. View our Privacy Policy. “There are no facts inside the building, so get the heck outside.” – Steve Blank