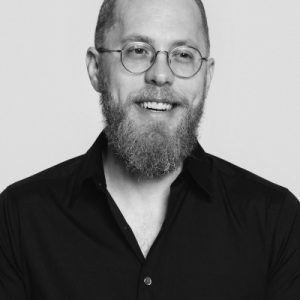 Have you been part of a Design Thinking or Design Sprint activity? I’ve used both approaches to explore customer problems, consider solutions, and create early prototypes of solutions. They’re great activities. But what happens after creating prototypes? These are intensive experiences, in the 2 to 5-day range. After they are over, what happens? A lot of times, the answer is not much. Creating a project to turn a prototype into a new product takes a lot more work.

Our guest knows how to help. Douglas Ferguson is a human-centered technologist with 20+ years of experience. He is president of Voltage Control, an Austin-based workshop agency that specializes in Design Sprints and innovation workshops and formerly worked with Google Ventures. He’ll tell you what to do after the Design Sprint ends.

A Design Sprint is a five-day-long innovation process with the goal to build and test a prototype or simulation of a product or service you intend to build. On day one, we focus on a distinct target. On day two, everyone sketches individually. On day three, we quickly decide what we’re going to prototype; learning fast is worth the risk of making a wrong decision. On day four, we make the prototype. And on day five, we begin to get insights from customers by testing the prototype with five users.

After a Design Sprint, rarely, you might have knocked it out of the park, and just need to continue fleshing out the designs and build the product. More commonly, you have some direction, but some things are unclear; you need to continue to test your prototype until you knock it out of the park. Other times, you might discover that you were completely wrong and should not build the product. Some people call that failure, but I call it a huge win, because in five days you realized that you need to stop, instead of continuing the project for months.

You’re back at your regular work after the Design Sprint, and you’re frustrated because you’re not doing anything with what you learned in the Design Sprint. One reason this happens is because you discovered new opportunities that the company has no home for. You may not have yet had a discussion about resources and expectations for the work that needs to get done. Because a Sprint is so fast, you might not have had time to put the necessary processes in place. The company might return to its normal habits, especially if people think that the Design Sprint didn’t work. After the Design Sprint, starting the needed processes in parallel can help you move more quickly.

[16:30] What should we do before, during, and after a Design Sprint to set ourselves up for success?

Plan ahead and set your expectations. Make sure people know that you’re going to make amazing progress and build momentum, but they still need to be prepared for hard work.

In a Design Sprint, someone has the role of Decider, whom you lean on to make decisions. If you pick the wrong Decider, the real Decider will emerge after the Design Sprint and won’t support the ideas you created. That will throw you into a slump. Before the Design Sprint, understand who the real Decider is. If they can’t be there, they can appoint another person, but make sure that they will support that person’s decisions. A good Decider is often the sponsor. The also need to understand the team dynamics, past work, and corporate strategy. They’re often directors or VPs of product.

Wrapping up well also helps you avoid the Slump. After the Design Sprint, you have new insights, but might have unanswered questions. The people who were involved in the Design Sprint need to be available afterward to work on those questions. Cultivate Design Sprint thinking in everyday work. Continually prototype, test, and talk to customers to learn fast.

Storytelling is also key. It’s important that everyone understands the same narrative, so that we’re all aligned on what happened, what it means, and what we’re going to do next. If we don’t clearly communicate, we’ll have have different perspectives and interpretations. On the last afternoon of the Design Sprint, we build a recap deck, including photos, insights, potential next steps, and quotes from interviews. The next Monday is a good time for a debrief, including revisiting the recap deck.

It’s critical to always be capturing. Throughout the week, not only take photos, but also capture conversations on the whiteboard. While the team is talking, I scribble every new idea and word I hear. When the conversation dies down, I return to a word and ignite a fresh discussion. Always be capturing so you can return to your ideas.

Finally, don’t forget to expand the inner circle. A Design Sprint is typically about seven people, but always be thinking about what other experts you need to bring in as you develop the prototype.

Bonus Question: What are your tips for making Design Sprints work well and avoiding pitfalls?

Choosing the right Decider and participants is critical. It’s important to have diverse participants, while including no more than seven people. You might do a workshop beforehand with all the people you’re interested in, and then choose who will be in the Design Sprint. During the Design Sprint, you can bring in extra people to help you with specific areas of development, but you don’t want someone who wasn’t in the Sprint leading your prototype development. The goal in a Design Sprint is to create the most realistic prototype possible with the least amount of work possible. Your prototype doesn’t have to be a physical object; it could be a brochure, webpage, or video. Make your product seem as real as possible to customers, because any ambiguity in your prototype leads to ambiguity in customer feedback.

Some people are reluctant to give feedback. It’s important to tell your tester what kind of feedback you’re interested in, although you may need to be vague so you don’t bias them. We are more interested in their reaction than their feedback. We want to know how they interpret the solution and what they like and dislike about it, but not what they think we should do next. One question I love is, “Who do you think this is for?” If they describe someone like themselves, they think they would use it. Ask really open-ended questions and listen intently.

I love prototypes. I’m a big fan of the mantra, “No prototype, no meeting.” A prototype doesn’t have to physically resemble the final product. However, some kind of hands-on physical object unlocks creativity.

“If you want something new, you have to stop doing something old. ” -Peter Drucker