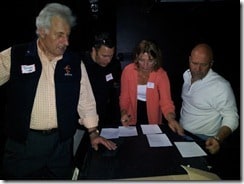 The judges deliberated over the accomplishments and failures of each team.

They had no easy task – the marketing presentations were creative and often hilarious!  However, some of the prototypes did fail to meet the requirements or impress the customers.  They praised each team for taking on the assignment and then moved to sharing their assessments. 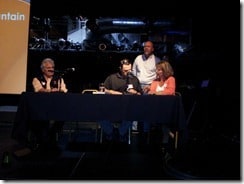 Three teams were immediately eliminated for not producing a marble run that successfully worked per requirements and failed to satisfy the customers. That left two teams.

Each was given specific feedback – such as the inclusion of options, marketing flare,  and application of a design process.  The customers also spoke, sharing their observations, such as being alienated in the design and development process – they wanted to be included.

The secrets of the winning team – working really well together with each member contributing, dividing the work into tasks, and sharing the workload equally.  They also praised their excellent spokesperson who shared the marketing presentation.  The winners with their trophies are… 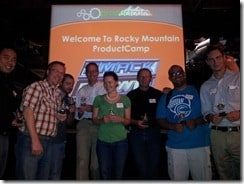 Everyone on this team made exceptional contributions, by their own admission of course

One member, Larry Marine, in the black shirt near the middle is the only RM Pcamp winner two-years in a row – he was on the winning team in 2011 also.  Way to go!