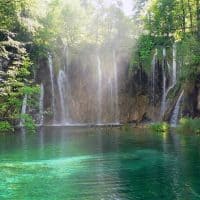 As I have traveled the US for the last several months visiting innovators I have also seen many engineering marvels, such as the Hoover dam.  While this dam is much more dramatic than the beaver dam I saw on a nature hike, the concept is the same. People have been inspired by nature for many innovations. We have watched birds taking off, landing, and flying to create and improve upon airplanes; studied dolphin communication to advance sonar and pattern recognition; and studied termites to learn more about organizational structures.

The act of imitating nature is not innovative. But thinking about natural processes, systems, or shapes—such as a bird’s beak—and what they are used for, is an exciting pathway to disruptive thinking and product redesign.

Biomimicry as a tool for innovation

If imitation is the sincerest form of flattery, then biomimicry is flattery 2.0. It starts with a form or material or structure found in the natural world. That becomes the basis for an innovative product design.

“‘It’s not really technology or biology; it’s the technology of biology. It’s making a fiber like a spider, or lassoing the sun’s energy like a leaf,’” according to Janine Benyus, co-founder of Biomimicry 3.8, as quoted in Forbes.

Forbes tells us that biomimicry is in the forefront of the push to develop new, sustainable technologies. After all, each form, material and process has been tested in nature many times. The basic notion is that if it has been working in the natural world, why not for us?

And, as a second article in Forbes says, if it has been tested time and again in nature, wouldn’t that save product innovators time and money in the testing phase of innovation?

Forbes offers these examples of current innovations that rely on biomimicry:

Has your company’s research and development group looked at biomimicry as a viable tool yet?

Some of the early adopters of biomimicry believe this is more than a pathway to innovation. They are leaping over the idea of evolutionary product advancement to suggest that an economic revolution may be coming. Forbes quotes Tom Tyrrell, founder and CEO of Great Lakes Biomimicry, saying that biomimicry is a pathway to “‘transforming many of the ways we think about designing, producing, transporting and distributing goods and services.’”

The economic impact? Industries such as engineering, IT, and manufacturing stand to gain the most. Tyrell cites Nazarene University’s Fermanian Business and Economic Institute’s estimates: a possible $300 billion of the annual U.S. GDP, and 1.6 million U.S. jobs by 2025. You can access the Fermanian Institute report here.

Already universities and corporations are forming partnerships to begin teaching executives, researchers, and students of all ages the principles of aping nature for the economic benefit of humankind.

It seems as if the biomimicry revolution is just around the corner.

My blog post on 6 Changes to Make You an Innovative Thinker underscored the importance of learning to “think new.” Applying the principles of biomimicry is an increasingly successful approach to thinking new.

Turning to nature for ideas in product redesign not only works, in many cases it may be a cost efficient pathway that leads to a tested and sustainable new product, new product design, or new process.

I am thankful for the time I get to spend in nature – if I pay close attention, it may just lead to a new innovation!

Too many interviews to review? We got you covered.

x
Send this to a friend